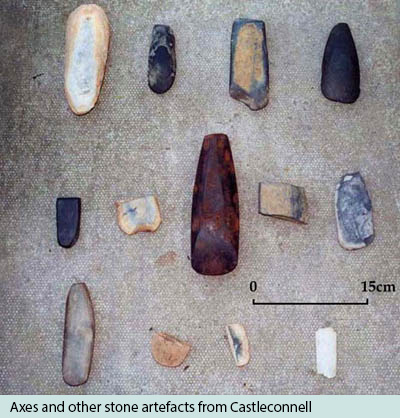 This site was originally test trenched by the Archaeology Unit of Limerick County Council, due to the way leave for the Castleconnell Rising Main, cutting through the zone of archaeological potential for RMP LI001-0001-, a potential fording point of the River Shannon, just downstream from Castleconnell village. This trenching revealed the presence of several archaeological features, which AEGIS ARCHAEOLOGY was contracted to excavate.

The excavation covered an area of about 4,400sqm. It was then divided into four areas, A-D, as the features themselves appeared in discrete concentrations.

Area A revealed three features This included a shallow circular pit and a circular cremation pit, in the centre of which was large stone axe, set blade downwards. This axe had once rested against a post that had been driven into the base of the pit prior to the deposition of the cremation. It is reasonable to suggest that this post projected out of the ground above the cremation pit, and possibly served as a grave marker. The third feature was an area of burning and heat-reddened boulder clay, which might be the site of the cremation pyre.

Area B had a large concentration of stake and post holes, with up to three small sub circular huts and a stone axe, worked flint and chert. An adze-axe was also recovered from the slot trench of one of the houses, while a cremation deposit was also excavated.

Area D contained several pit features, which did not contain any datable material.

In all, fragments of 13 stone axes were recovered, as well as vast quantities of worked flint and chert. The excavation was funded by Limerick County Council. The Hermitage Archaeological Research Project (HARP) was formed in 2017 to progress knowledge of the site. It is led by Dr Aimee Little, University of York and comprises a group of specialists and the excavators of the site. See the HARP website for updates https://sites.google.com/york.ac.uk/harp/home